How was your holiday season? Did you have a happy new year? Are you still dealing with the “holiday hangover”? Are you glad it’s over?

For us, our holiday “vacation” was extreme. It was wonderful to see family and friends, but we had some comically terrible circumstances. I mean, all we wanted to do was fly across the country and travel across three states to see family with a 13-month-old in tow. What could go wrong?

Shortly before we left Ohio for Seattle, our daycare informed us that some kind of gastrointestinal “bug” was going around and that several kiddos and staff members were “dropping like flies.” We downed cups of Emergen-C, crossed our fingers, and frantically packed for our trip.

The 6am flights for our family required us to wake up at 3am to pack the car and get out the door by 3:30am. Neither of us slept much the night before, as we were trying to do a bunch of ridiculous chores, like washing all of our cloth diapers before we left, and figure out what to pack for our baby. We had conversations like this: “Do you think we should bring cloth bibs?” “Will TSA let us bring Aquaphor on a carry on?” Aaron and I are not opinionated about packing, so we ended up hemming and hawing about stuff like this until we didn’t know what made sense anymore. Eventually we just threw a random assortment of baby stuff in our suitcases and hoped for the best.

I maintain that awards (or at least extra snacks) should be given out to people traveling with an “infant in arms.” Holding an infant throughout a flight is like trying to wrestle with a feisty and noisy octopus for hours on end while pretending that everything is absolutely normal for your seatmates. Oh, and changing a diaper in an airplane bathroom is some Houdini level nonsense.

But it wasn’t all bad. Below is Ansel and myself in my favorite airport spot in the US, the DTW tunnel! 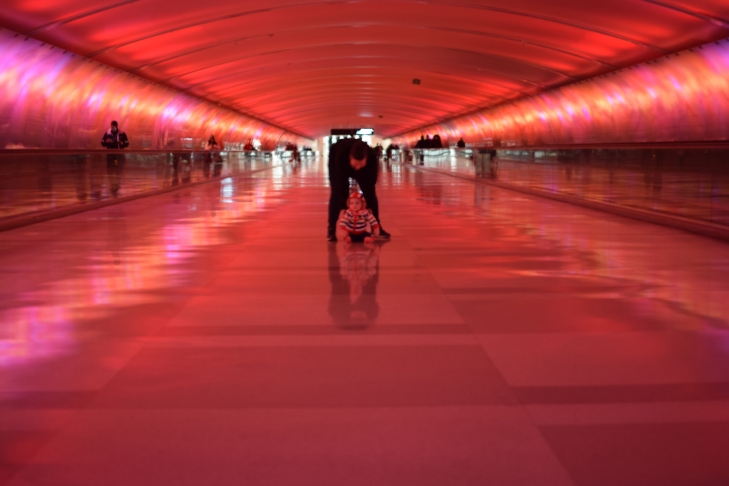 Our friends Michael and Kelda threw us a party in West Seattle the night before Christmas eve. There were a ton of wonderful friends there, including a long-lost friend of mine who now does incredible installation artwork in Seattle. I was having a grand old time, but at one point I looked over at Aaron and noticed that he looked white and clammy. You know that food poisoning scene in Bridesmaids when Kristin Wiig tries to pretend she’s not sick? That was Aaron at this party.

So Aaron got the terrible daycare bug, then I got it starting on Christmas night. Thanks, Santa! And then I ended up staying in bed for 24 hours and puking into a plastic bowl like an 8-year-old.

At least I got sick after enjoying a Christmas eve lunch with my mom and Ansel in downtown Gig Harbor. (Look at Santa and his elves on their SUP!)

We then traveled from Gig Harbor to Walla Walla to see my dad, and then from Walla Walla to Whitefish, MT to see Aaron’s family. Adding to our travel drama, at one point in Idaho I was convinced that I should go to the ER because I felt my mouth and tongue were tingling and I was still feeling really lightheaded in my norovirus recovery.

Aaron was like, “You’re fine.” I was like, “I am not fine! My tongue tingles! I feel faint!” So then he got me some food (a steak salad and sweet potato fries). And guess what? I was just hangry. 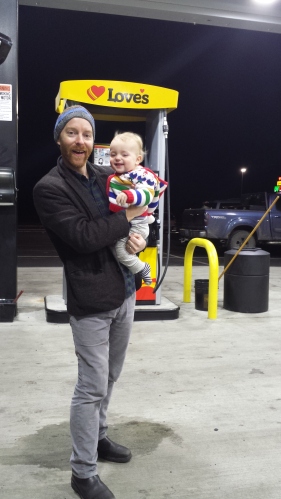 And even though I was still somewhat ill and it was snowing heavily on our drive to Whitefish, the landscape was beautiful and Aaron and I made dumb jokes and got Ansel to babble-sing with us to “Winds of Change.”

We had a really lovely time in Montana. We spent lots of time with family and even had our own Caga Tio (the Christmas pooping log) under the tree!

Probably my favorite evening was having dinner at Inez and Bob’s *super grade-A hygge* cabin in Columbia Falls. I mean, she had candles set up outside on their path to their front door. What?! SO HYGGE!! They have property that is really close to Glacier National Park; the view from their bathroom is phenomenal.

But then Ansel had several days of very high fevers and not wanting to eat and we had several very restless nights, including New Year’s Eve in which I spent a good solid hour comforting Ansel while the clock struck midnight.

All of this to say that, while the holidays were great, I am so glad they are over. And with the new year I have exciting new goals for cake making!

You all know about Christina Tosi and Momofuku Milkbar, right? Here is her amazing cookbook. I have cherished this book since it came out in 2011. It’s the kind of cookbook I take to bed with me to read in hopes that I’ll dream about such wonders as her birthday cake crumb or her cereal milk ice cream.

For the new year, I wanted to (finally) make myself one of her uber-complicated cakes. I chose her chocolate chip cake in part because its outlandish and bold flavor combinations, and in part because it doesn’t have nuts (Aaron is allergic to nuts). (I do make lots of baked goods with nuts, but I was feeling particularly generous for my first cake of the new year).

The cake has a lot of components. You start out by making a chocolate crumble (kinda like crumbled Oreos, but homemade and immensely better) and a passion fruit curd.

Do you know how hard it is to get a hold of passion fruit puree, by the way? Whatever you do, don’t buy it off Amazon where it is ridiculously overpriced. You should be able to get the Goya brand version at a local Mexican grocery store for a couple of bucks. It literally took me months to figure this out.

Next you make this super moist chocolate chip cake. It has buttermilk and grape seed oil in it, which is unique and helps it bake into a dense and almost sticky cake. 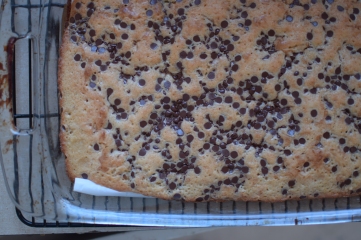 Then you make this coffee buttercream that is bizarrely the hardest part of the whole recipe. I think I didn’t let the butter get soft enough; she calls for room temperature butter, but who really has the forethought to put butter out long enough to get at room temperature? Okay, probably a lot of good bakers. 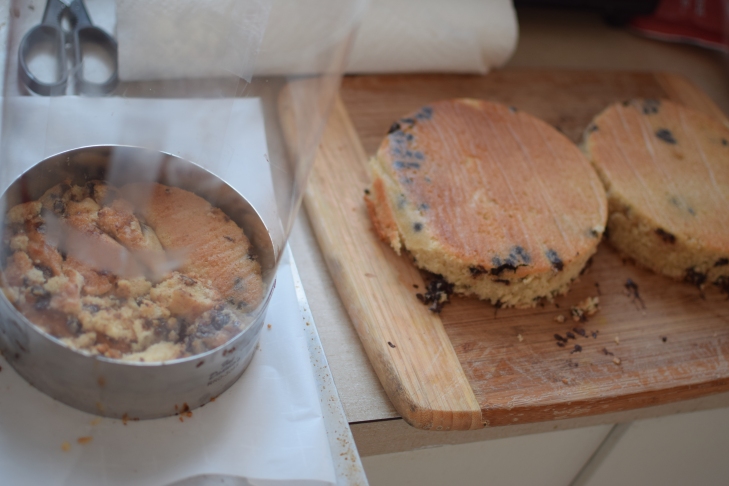 Then you put the cake together! This is the most exciting part. You make three layers of cake from your pan of cake by cutting out two circles and then by using the scraps to fill in the bottom layer. I was nervous about this, but it actually worked quite well in the end. 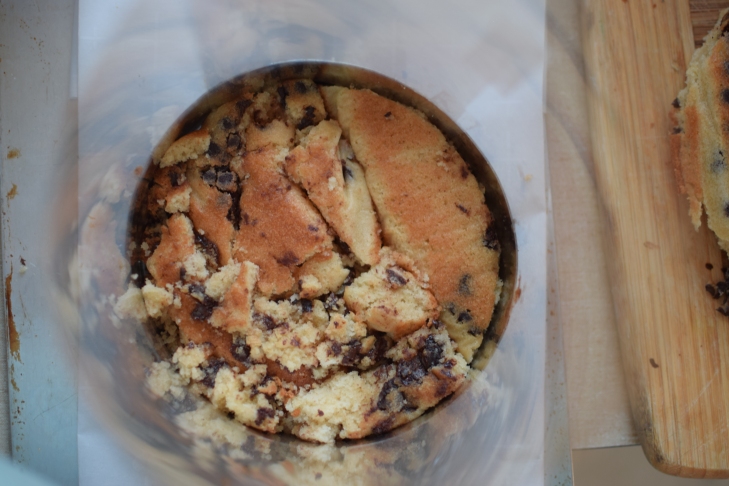 Then you cover the first layer with a bath of passion fruit puree. 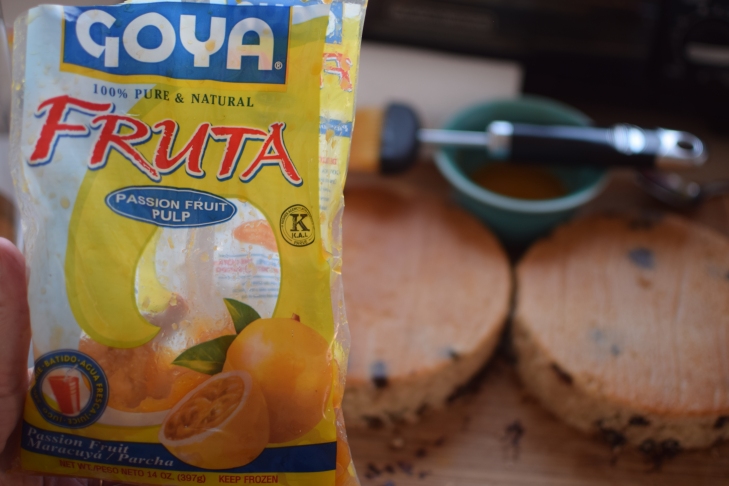 Then on comes the passion fruit curd.

And then the chocolate crumbs. 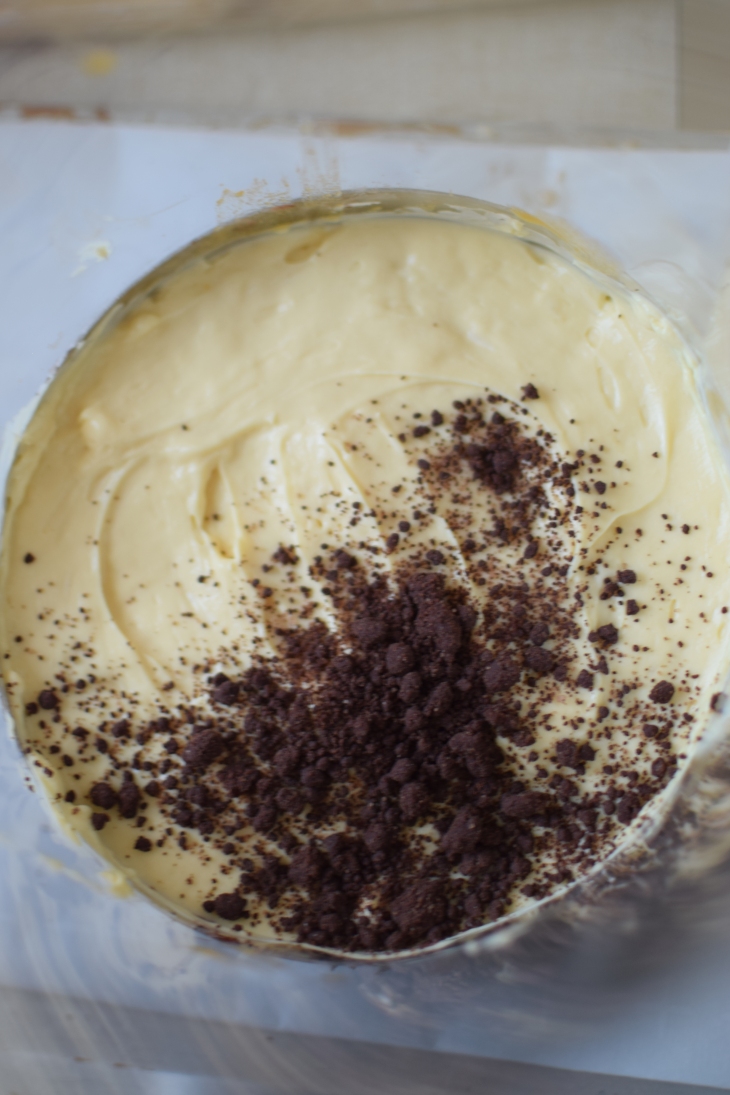 And then you smoosh on the coffee buttercream and start the whole process over again with the second layer!

And then, once the cake is all put together, you add chocolate chips on top!

Then Tosi says that you need to put this heartthrob in the freezer for at least 12 hours. AND THEN you have to put it in the refrigerator to thaw it enough to serve for an additional 3 hours. This is torture, but an important step for the cake to set.

If you love something, set it free. If it comes back to you, eat it for lunch. 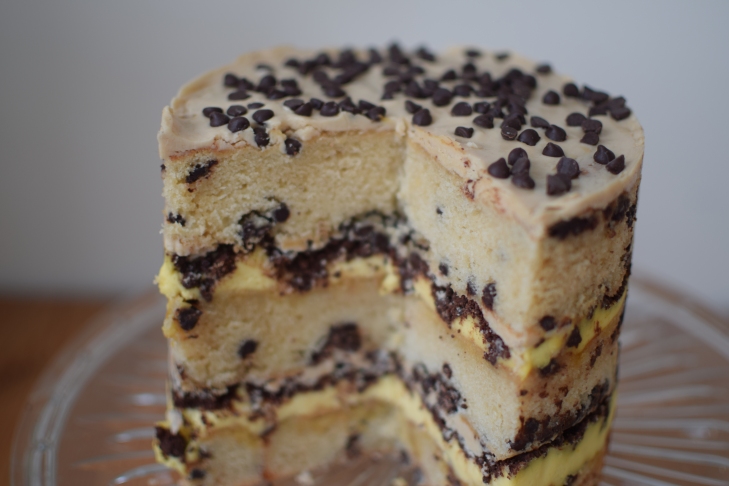 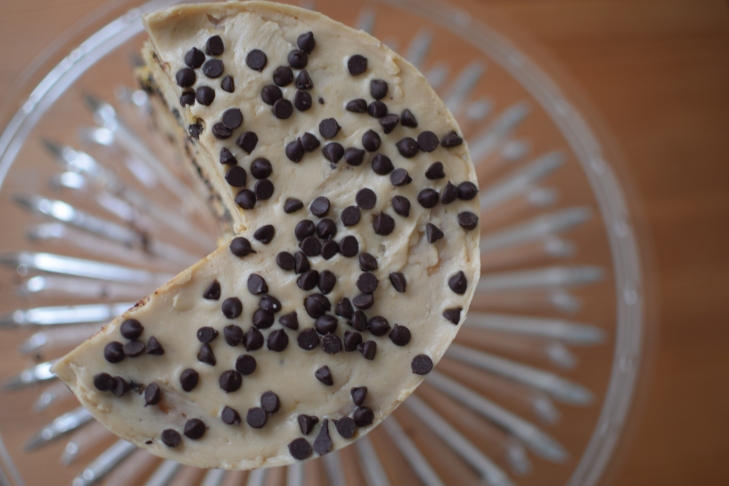 If you want to try to make this, you can find it in the Momofuku Milkbar cookbook or here.

Enjoy, and here’s to a bright and healthy New Year! 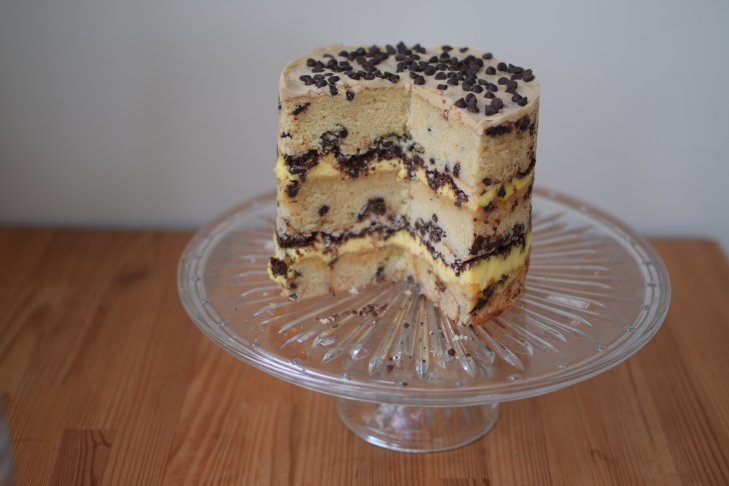