For years, one of my main schticks was to pull my pants up really high and squeeze my buns so that I had a huge wedgie. I’d walk around and act like everything was normal, but have a huge wedgie. I called this my “pants trick.”

Let’s be real, “pants trick” is still in rotation.

I’m a total hypocrite because I have these super-dorky schticks that I love to do/say over and over again and I think I’m totally hilarious, but I get really grumpy when people use jokes that I consider to be cliche or overused. 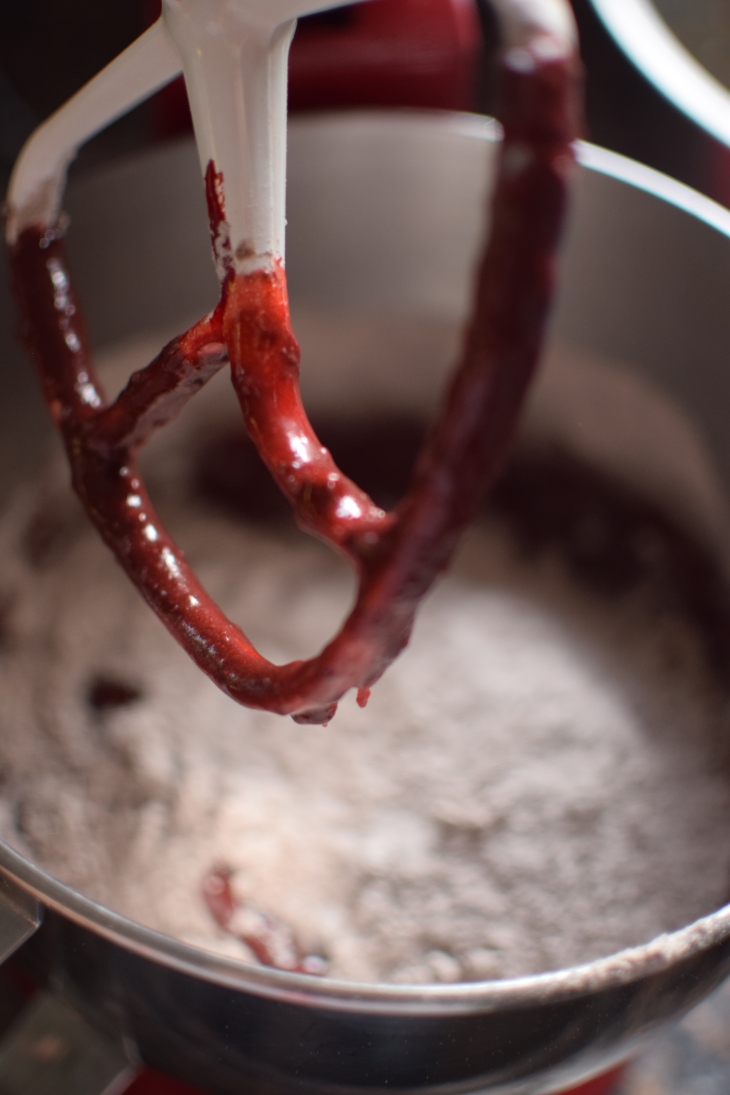 But it’s like, wait – why am I getting all Judge Judy about jokes over here?! I’m the one whose main joke is something called “pants trick.” 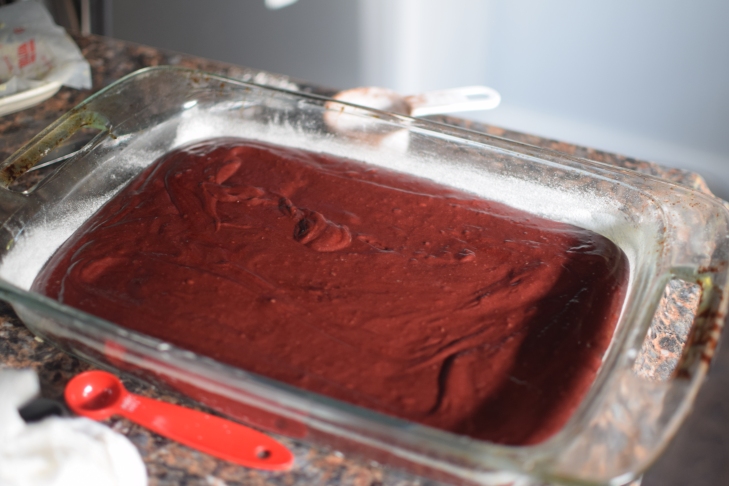 This might be a bad time to point out that my friend Mara has been a big influence on my comedy style.

In high school Mara and I were OBSESSED with the MTV sketch comedy show The State. We were inspired by The State and had a cadre of friends with whom we made ridiculous sketch comedy videos (including real winners, such as “Real World: Gig Harbor”).

Mara has one of the best senses of humor of anyone that I know – she likes the absurd and dark humor, but she is also a fan of physical comedy and seems to really get a laugh from jokes about body hair. Plus, Mara’s laugh itself is hilarious (she has one of those snort-laughs that seems so uncharacteristic coming from her usual buttoned-up self).

Mara is good for keeping me up on comedy stuff and introduced me to “Tim and Eric Awesome Show, Great Job!” and one of their best sketches, The Snuggler!

When Mara invited us to her birthday party last weekend, I decided she needed a The Snuggler cake!

I made a red velvet cake, but I used dark cocoa powder, so it ended up more like maroon velvet cake. I think this is actually more appealing to eat than a bright red cake. 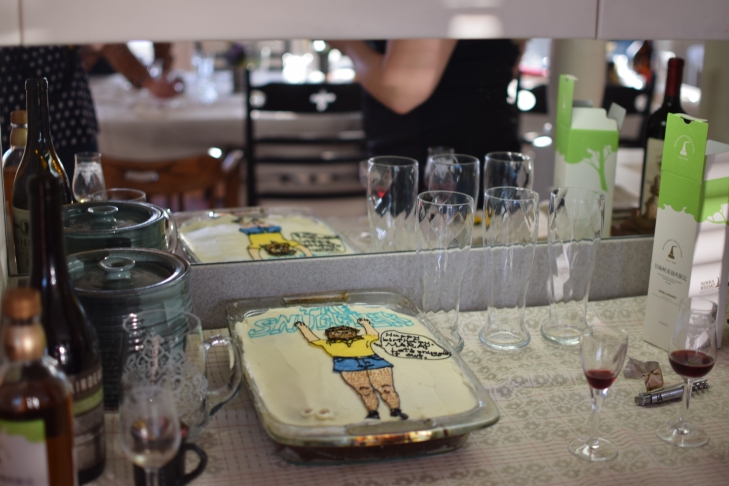 One thing I LOVE about The Snuggler is when Zach Galifinakis has his back to his audience and his jean shorts are up super high. And then he turns around and shrugs, “I am The Snuggler.”

There is something just universally funny about wedgies, right? Or maybe they’re just funny to me because they were so ingrained in my childhood. When I was little, my older brothers would give me wedgies and call them the “brownie treatment.”

The Snuggler cake was a big hit at the party, but because it’s pretty obscure, most of the party-goers didn’t have a frame of reference for the case. Naturally, the party gathered around the computer to watch The Snuggler! YouTube enhances cake-eating!

I don’t have pictures, but the cake followed an extravagant dinner that was themed as a “Latvian Meat Fest.” There were multiple kinds of sausages, smoked ribs, smoked herring, beets, potato salad, pretzels, and so many beers. And look at the adorable floral arrangements! 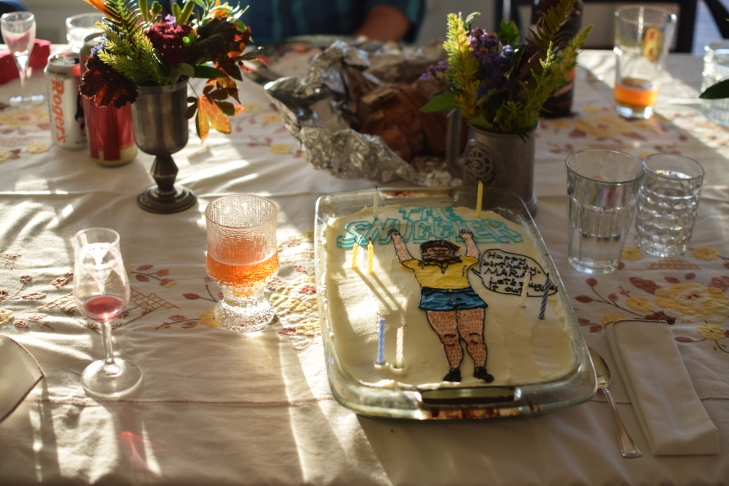 We had a wonderful time celebrating Mara!

I’m looking forward to making my next Adult Swim cake. Any ideas for that?!

This last weekend, we also went to a pumpkin patch in Puyallup. Last year when we went to a pumpkin patch, we were able to plop Ansel down wherever we wanted and got super-adorable pictures. This year, Ansel was all over the place, climbing on pumpkins, running through the rows of pumpkins – anything but sitting and smiling among the pumpkins.

We did manage to get a dorky family picture though. 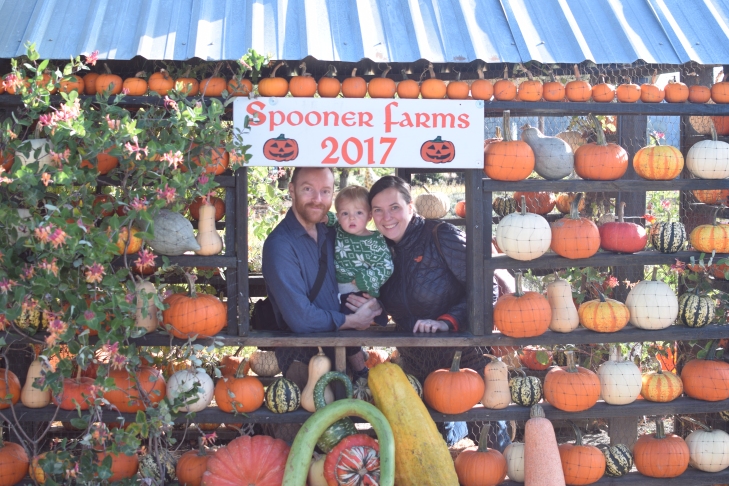 And some traditional and unique pumpkins!

What are you going to dress up as for Halloween?! I just got a special wig in the mail for my outfit. Here’s a hint.