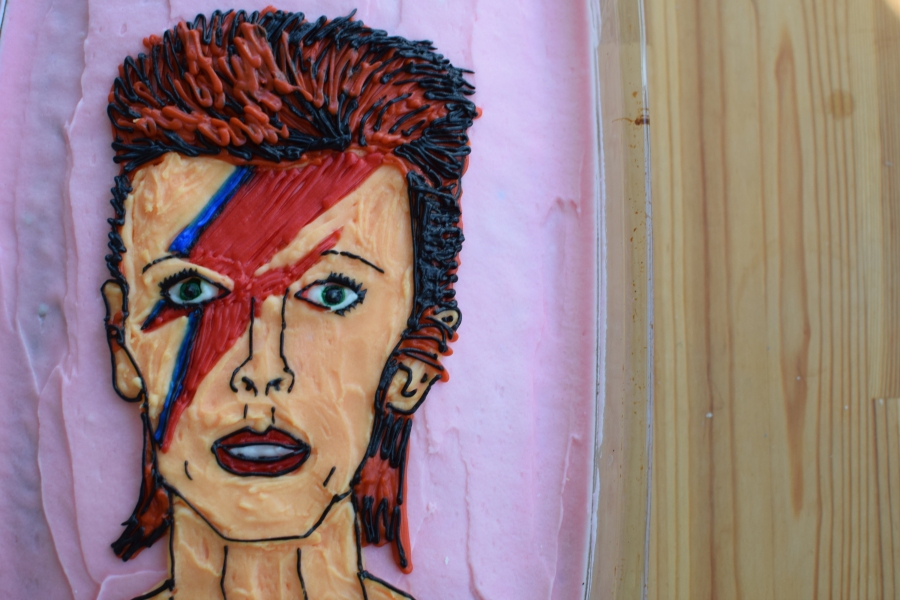 I’m going back to work from maternity leave in a week. ONE WEEK. The days are starting to feel like perpetual Sundays with a looming perpetual Monday ahead. 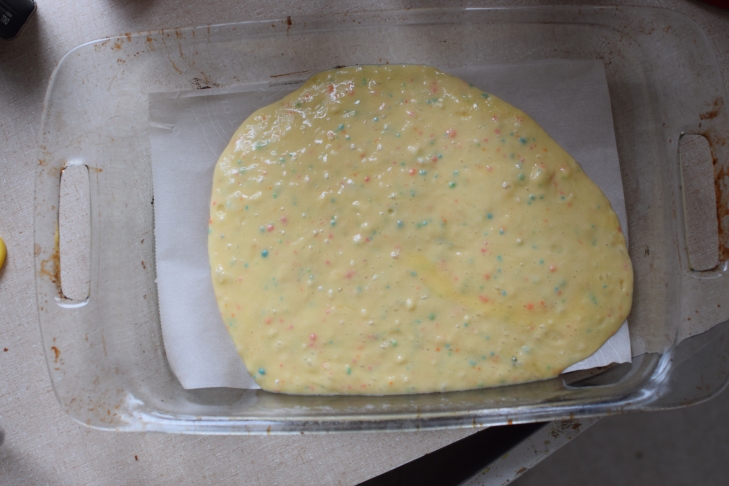 But don’t get me wrong – I am actually excited to go back to work. Taking care of a baby all day is incredibly exhausting. What I wouldn’t give for some conference calls and report-writing. Maybe an hour or two working on an Excel spreadsheet. What a dream! But I know I’ll also miss my baby during the day and I’m feeling a bit anxious about the whole transition. 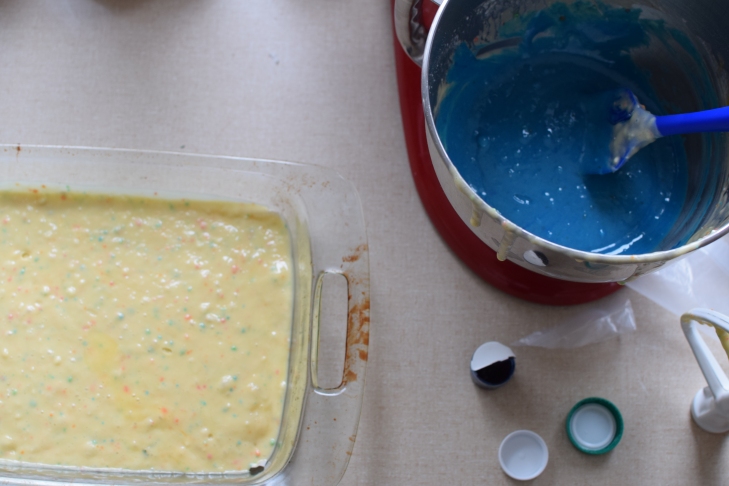 So how to deal with this big looming transition?! Make a David Bowie cake. 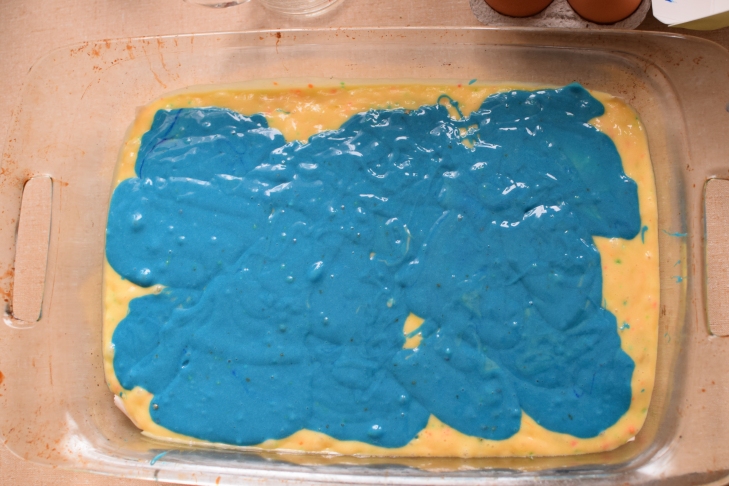 David Bowie was a dad too. I bet he would understand how I’m feeling. 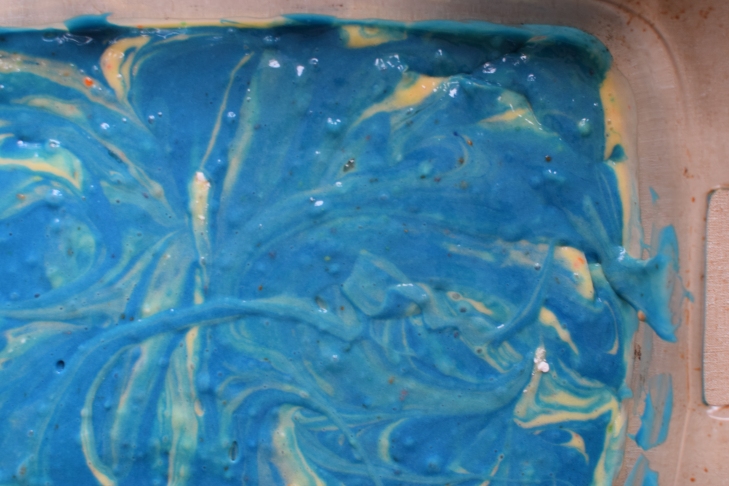 In an interview he said, “I never thought I would be such a family–oriented guy. I didn’t think that was part of my make-up. But somebody said that as you get older you become the person you always should have been, and I feel that’s happening to me. I’m rather surprised at who I am, because I’m actually like my dad.” 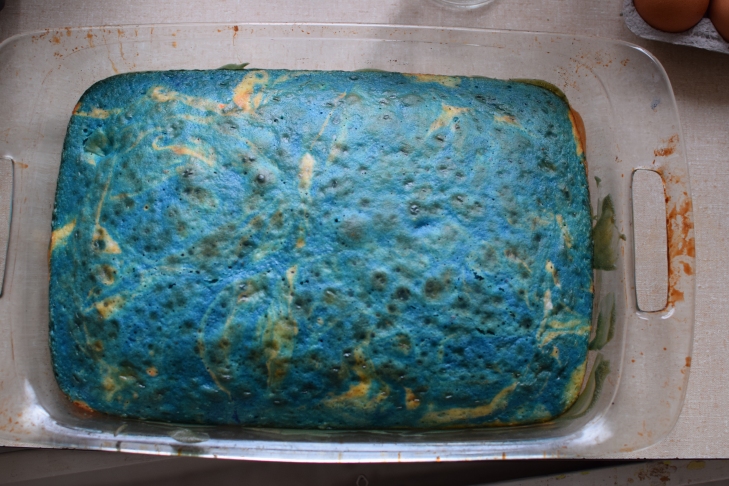 Who doesn’t love David Bowie?! When I was in college I had a friend, John, who LOOOOOOOVED David Bowie. I can’t remember what prompted this, but I painted David Bowie on an army jacket for him. He wore it around all the time and I was so flattered.

So this cake features my second Bowie portrait. The cake itself looks gross, but tasted great. I just used a funfetti mix from a box (sometimes I’m just too busy/lazy to actually make a from-scratch cake). And I dyed half of the batter blue, with the idea that I would swirl the yellow funfetti batter with the blue funfetti batter and it would look like the cosmos. 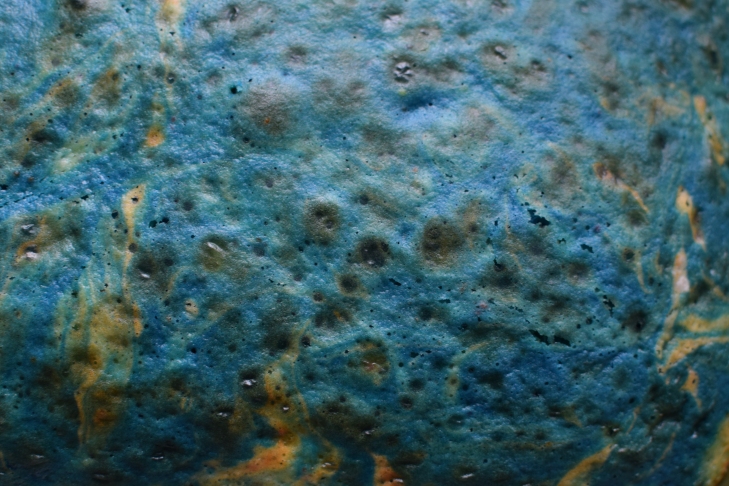 When I pulled the cake out it looked pretty gross. But still kind of galactic, right? Or like the surface of a planet or a moon? I think I should have put blobs of the blue and yellow batter next to each other instead of putting the blue batter on top of the yellow batter before swirling. Whatever! Next time, right? 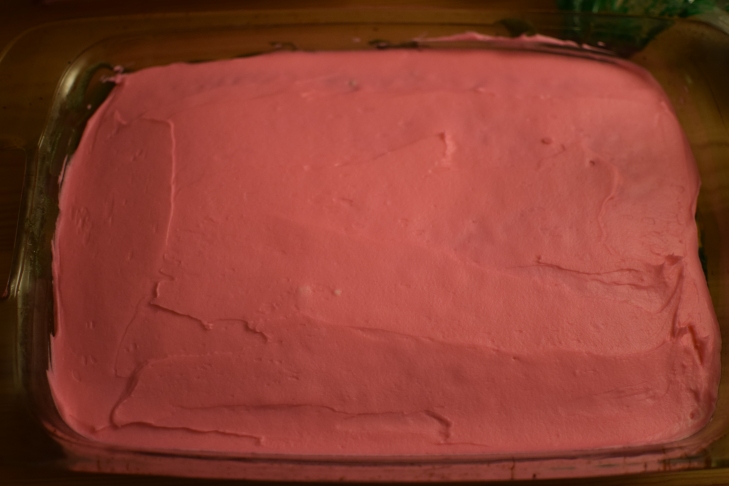 Pink frosting seemed appropriate. And I thought I’d draw him with his iconic Aladdin Sane make up on. You can see the bags of colored frosting that I put together to draw DB. I don’t use any fancy equipment; I just fill a sandwich bag with frosting and cut a tiny hole in the corner. 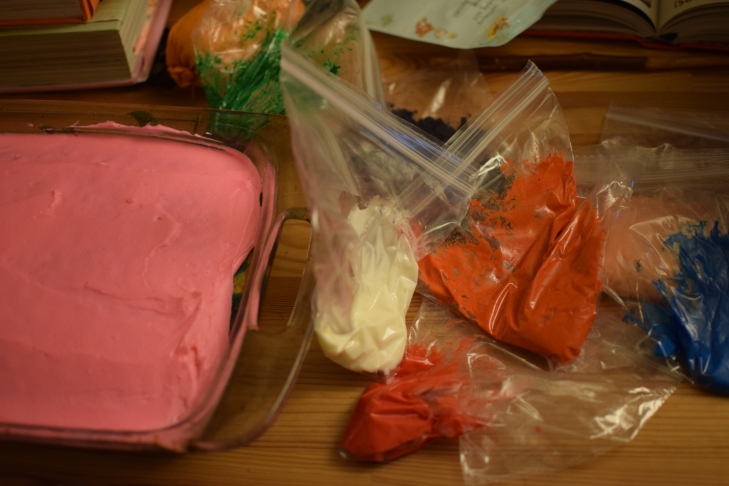 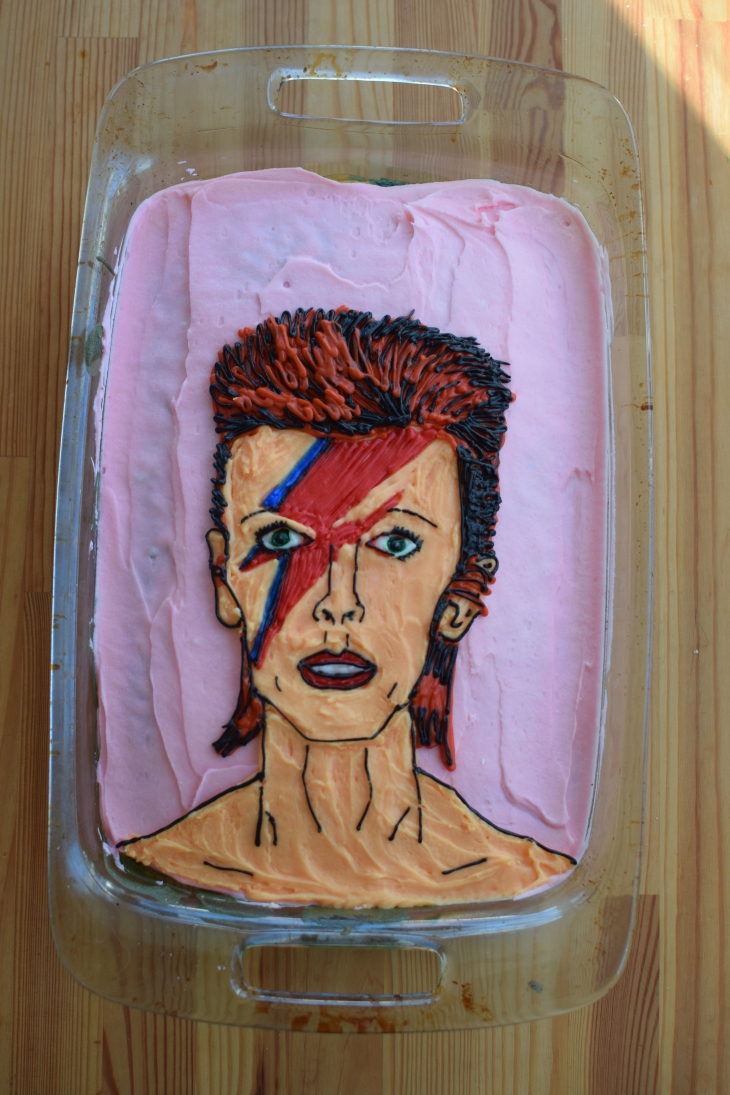 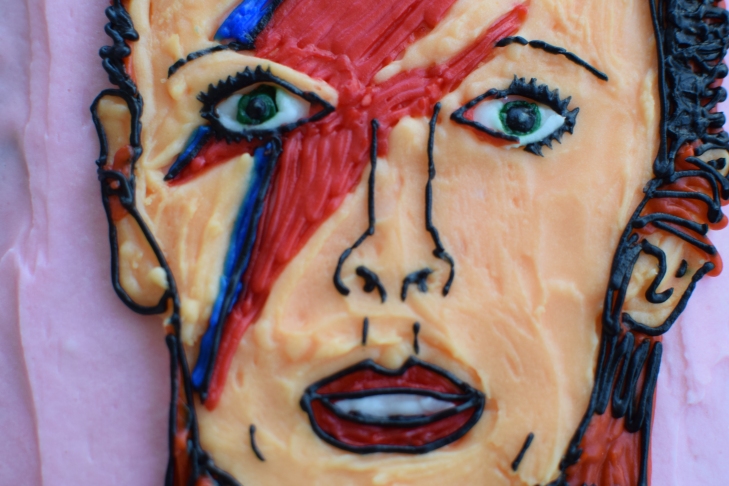 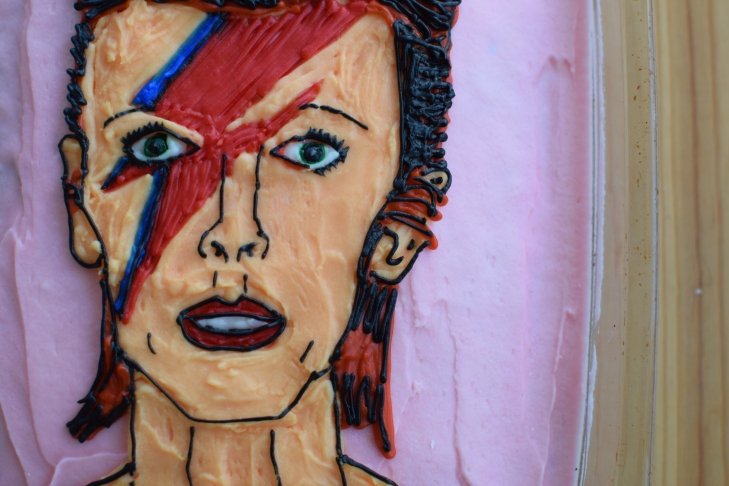 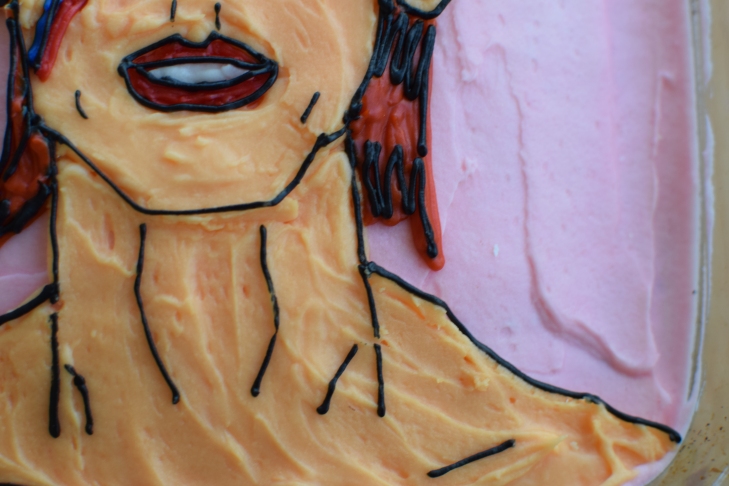 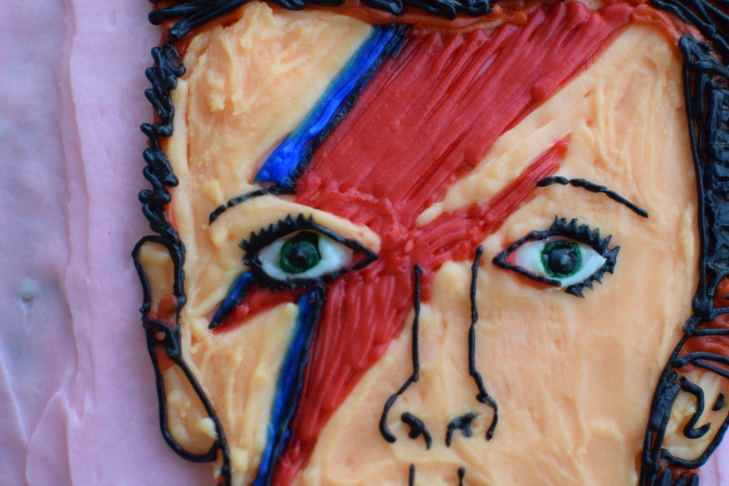 Nothing hits the spot more than a piece of David Bowie cake after a night of crappy sleeping with a 12-week-old. 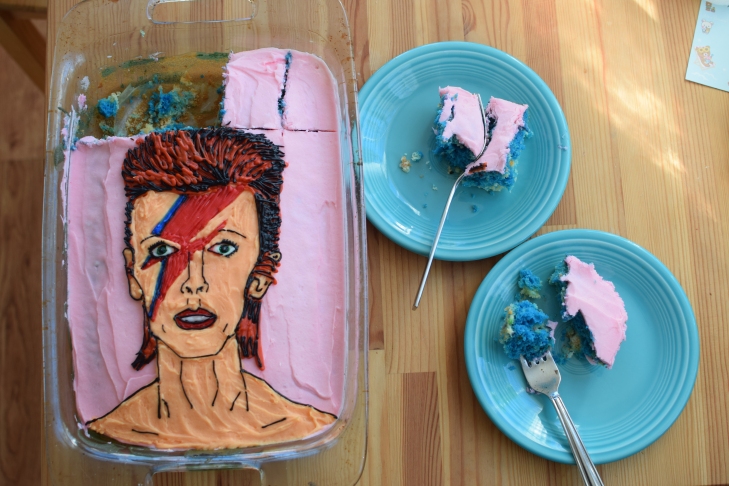 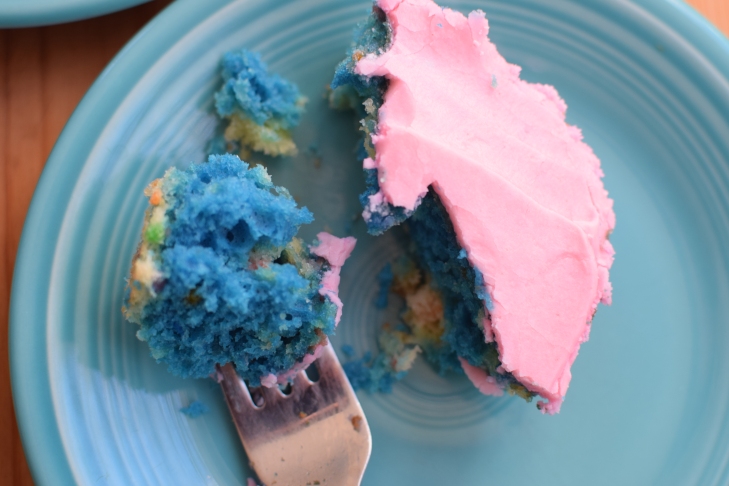 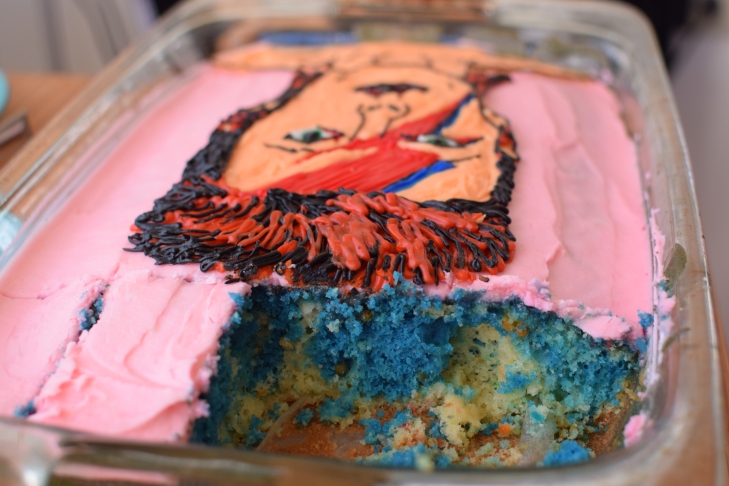 When I go back to work next week, I’ll be putting David Bowie on the repeat and let his songs guide my way. 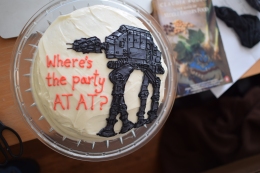