I have known Aaron Cavin, my partner, for almost half of my life. I often tell people that I know that he is magical, but if you have met Aaron, you don’t need me to tell you that. 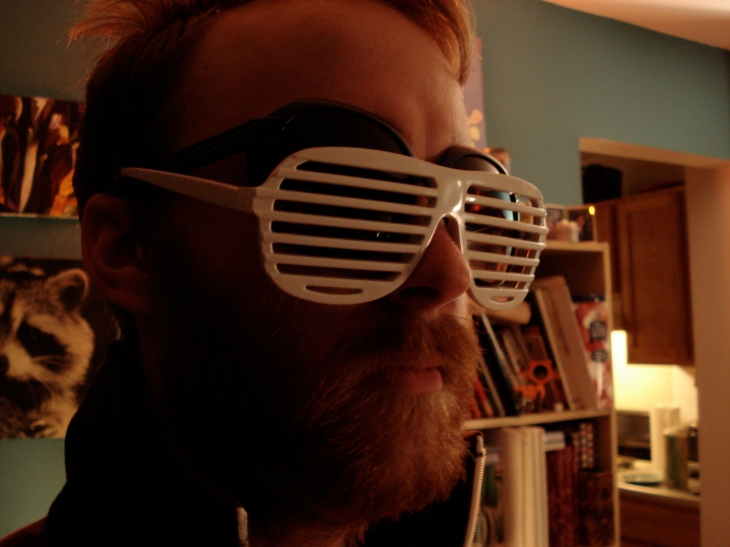 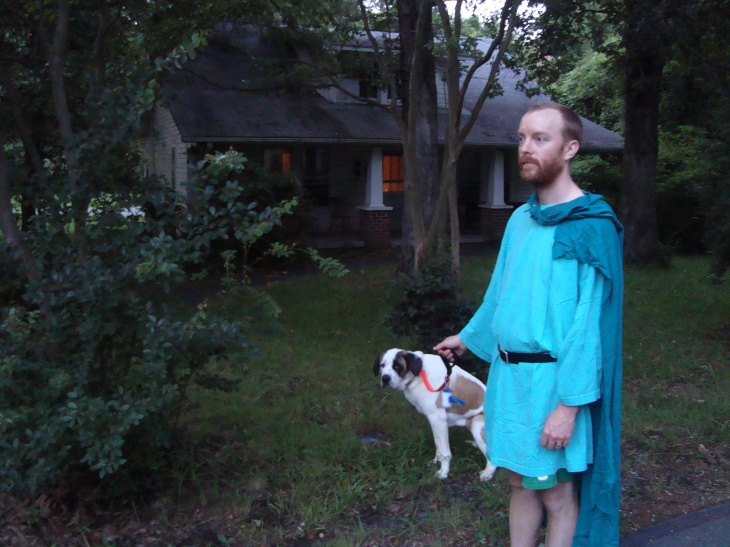 He has been this way since he was tiny.  I mean look at that ‘tude. The way he is leaning against the tree holding that throwing star. SWAGGER.

He is also the best partner. I know everyone says that about their partner. And I always speak in superlatives, but Aaron is seriously the best. 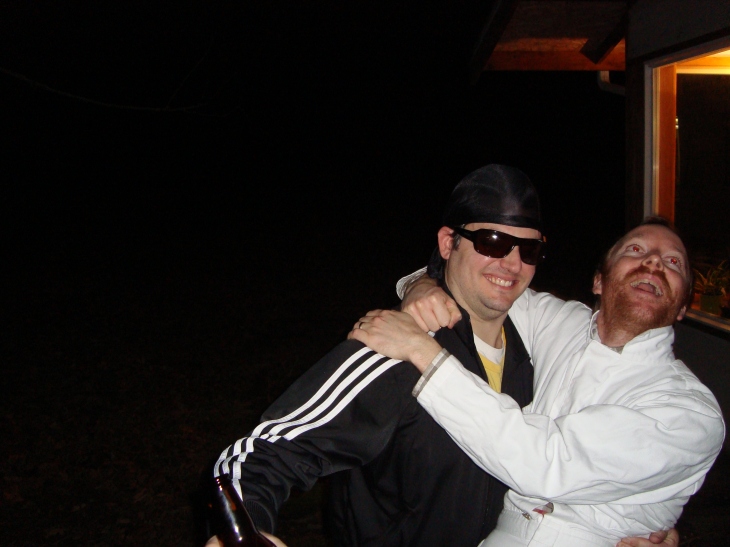 His fashion sense is unparalleled.

And he has incredible facial hair. 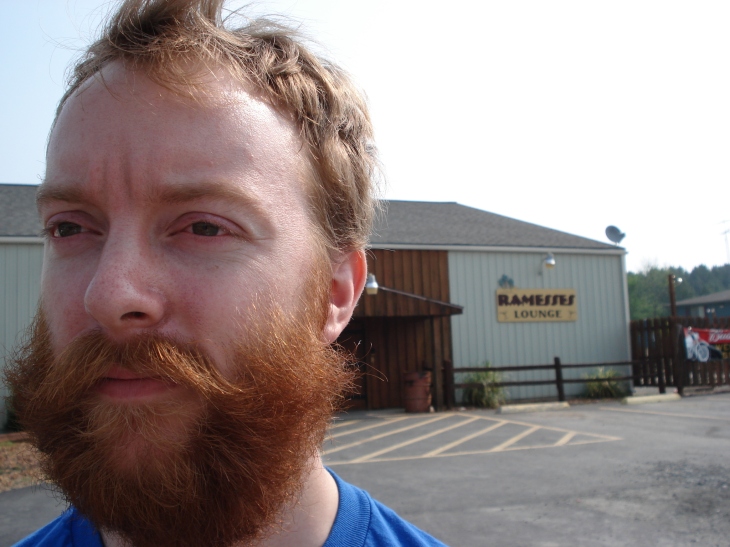 And you always feel like you are on an adventure when you are with Aaron. 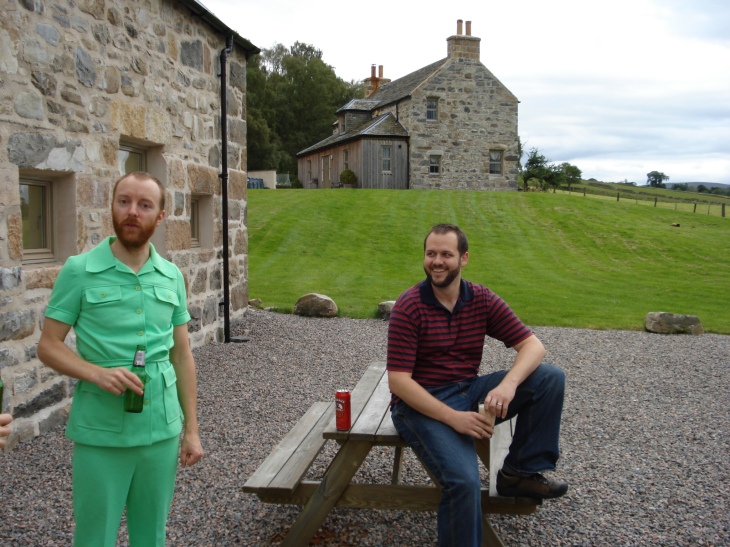 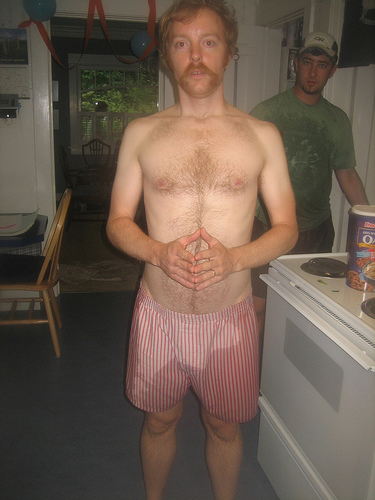 Aaron’s also been an incredible new dad. He is always patient and loving, even when he is so exhausted he forgets to button his pants.

It was Aaron’s birthday last weekend and I decided he deserved a special cake. A cake that would be emblematic of Aaron Cavin.

Aaron is one of those people who joyfully puts molasses on everything. He’ll grin at me and just POUR molasses over oatmeal, ice cream, yogurt. He knows it drives me crazy. I think molasses is one of those flavors best used as a “hint.” But not Aaron. He’ll slather any ol’ food-thing with molasses. SLATHER IT.

I knew the cake would need to be molasses-heavy. I decided I would make a two-layer gingerbread cake. It called for a full 2 CUPS of molasses. 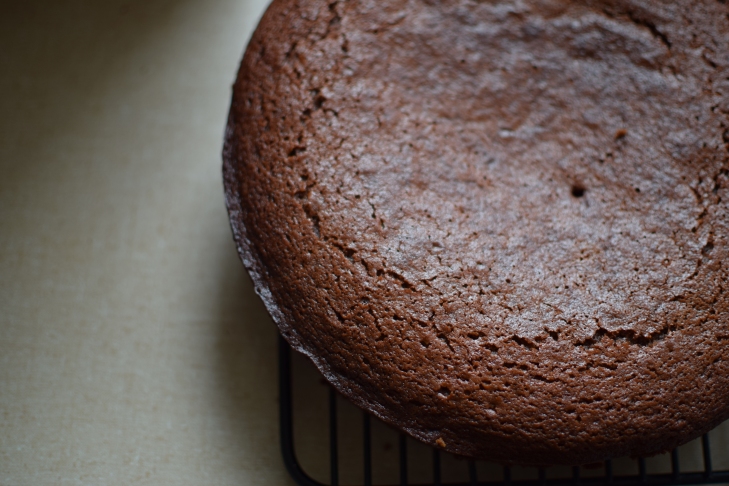 I thought that a tangy cream cheese frosting would pair well.

But, of course, the big question was: What should I put on a birthday cake for the love of my life?!

When we sit down and watch TV together, Aaron suggests one of three options: David Attenborough nature videos, Wonders of the Universe with Brian Cox, or any one of the BBC mystery shows on Netflix (Foyle’s War, anyone?).

But he’ll have none of that. He’ll just pour some molasses all over popcorn and convince me to watch “The Life of Birds.”

Given his obsessions, I opted to decorate the cake with a drawing of Aaron in the center, flanked by Brian Cox and David Attenborough, and a background of the milky way. 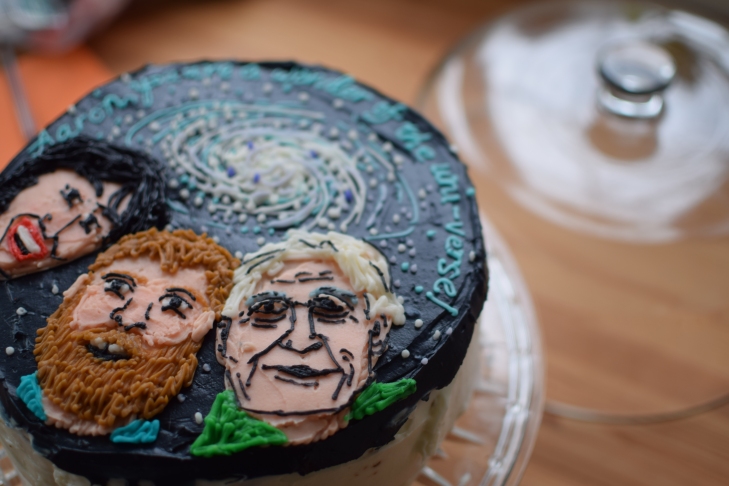 We were fortunate to have Aaron’s brother Andy and his fiance Cat visit us from Ann Arbor for the weekend. In the evening, we got a babysitter, went to Cincinnati, had adult food at an adult restaurant, and played video games at this awesome arcade bar. And, of course, we also ate cake and played a super-dorky board game, “Forbidden Island.”

I had such a good time celebrating Aaron that I wasn’t upset about daylight savings time. I mean, I didn’t even really notice that we lost an hour.

And that’s the power of Aaron Cavin, folks. Because, even on days when you feel like you’ve been run over by a train, and you lose a precious hour, and your baby gnaws at your nipple while breastfeeding like it’s chewing tobacco, being around Aaron Cavin makes you feel alive, adventurous, positive, and silly. And he truly is magical. And he truly is a wonder of the universe.

3 thoughts on “Sir David Attenborough Wonders of the Universe Cake”