Have you ever been pooped on by a bird? Were you just walking down the street or in the forest or having a picnic and – BAM – there was bird poop on your face and all over your clothes and in your hair?

In the last couple of months I have been pooped on by a bird twice. TWICE.

Once I was just walking in the park and saw a friend who was holding hands with his new girlfriend. As he was introducing her to me, HELLO BIRD POOP. That wasn’t awkward at all. The other time I was talking to Ansel’s daycare teacher at a picnic and she literally screamed and ducked when a bird flew over us. I thought she was crazy, but then I had bird poop all over my hair, clothes, and on my sandaled feet.

When something happens twice, though, you can’t really make a big deal of it. It was only a two-time thing. But then…

I was having a conversation with my mom the other week and it went like this:

“Katie, I’m so sorry to tell you this.”
“What Mom?”
“We went into your room [my childhood bedroom] yesterday and it was covered in purple bird poop. I think it’s ruined the walls.”
“Wait – what?! How did a…”
“We have been looking for the bird. We don’t know where it is.” She paused. “The poop is probably purple because of all the huckleberries in the backyard.”

Okay universe, I see you and your purple bird poop all over my childhood room. 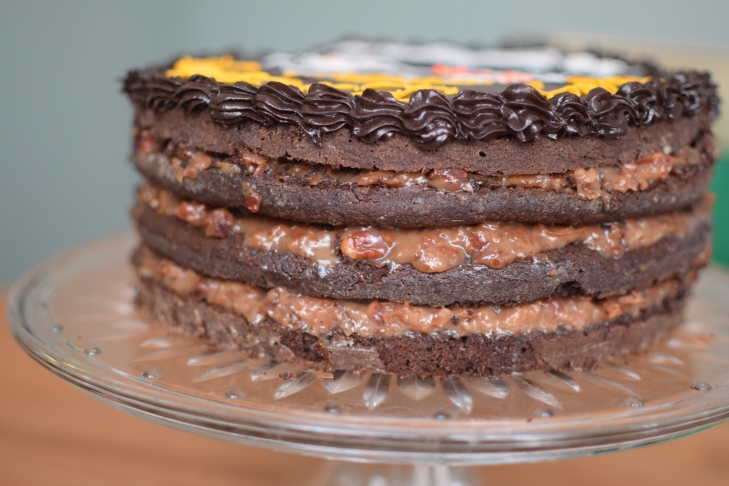 The mental image of the purple poop-smeared walls of my childhood bedroom feels suitable for me right now. Not to get too personal, but I have had all kinds of tough life stuff lately. Some devastating things (hard family news, and the death of a dear friend), and some general life stress stuff (month-long family flus, needing and getting a new sewer line, dealing with an old house in a new city, and being a one-income family).

Life can just be hard and so painfully sad sometimes. And I’m just trying to take all of the things in my own small little life in stride.

Apparently the bird came in through a window that was cracked open and (hopefully) made its way out after it left it’s mark. My mom is talking about re-painting the walls because the poop stains were so bad.

There is probably no graceful way to segue into the cake at this point, so here goes. I made this German chocolate cake for my mom’s husband, Dan. He had a birthday back in August and made a request for German chocolate cake (which I had never made before). My mom suggested that I decorate with one of Dan’s most favorite things in the world, his Mercedes convertible!

You need to know that if you make German chocolate cake (and I used this insanely brilliant recipe from Smitten Kitchen), you should just go ahead and double the pecan-caramel-coconut-rum filling because you’re going to need to eat half of that straight with a spoon. The ooey-gooeyness of it all plus the pecan and coconut crunch and then the spike of rum makes for one addictive spread. This stuff is especially dangerous if it is slightly warm. MMMMMmmmmmmmmMMMmmmmmm….

We served it at Dan’s birthday party, which my mom hosted in her glorious August-flowered backyard.

Dan and his grandson, James, blew out the candles! 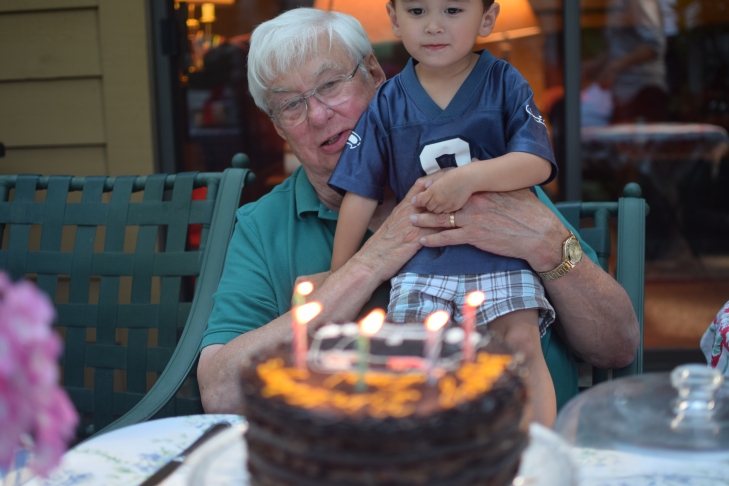 The cake itself was super deep and chocolatey. It had melted chocolate, cocoa powder, and espresso in it, and it was layered with the aforementioned pecan-caramel-coconut-rum spread of the gods. Plus the top was smothered with a dark chocolate buttercream frosting. 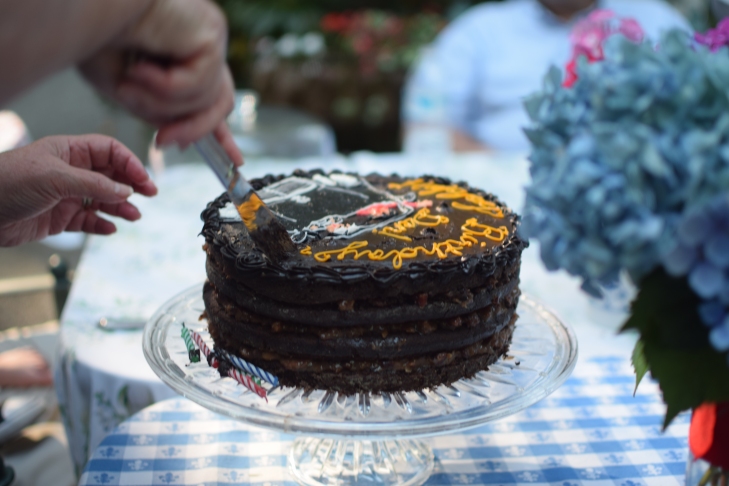 Even a small slice was an intense experience.

I will definitely make it again! 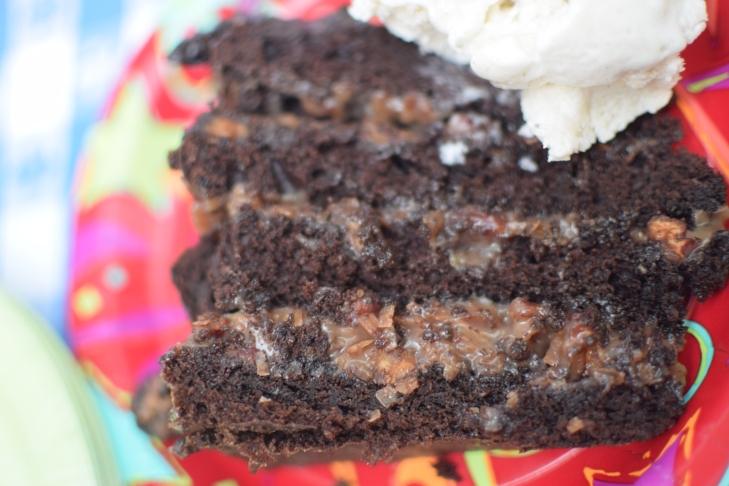 Speaking of inopportune pooping, Aaron and I spent late summer taking Ansel on some hikes! Behold his excitement!

Hiking with a toddler presents all kinds of “opportunities.” All in all, we found it doable! Yeah! Here are some things that happened:

(1) Ansel had some meltdowns on the trail replete with blood-curdling screams and big fat tears. No need for bear bells! He usually recovered via graham crackers.

(2) Ansel had a poopslosion on one hike and was a wriggly mess when we changed his diaper on the trail. Dusty trail + poopy diaper = sticky art experiment that you have to pack out! Weeeeeeee!!!

(3) Ansel sometimes slept in the backpack for his naps. Hiking naps ranged from 15 minutes to an hour. The hike with the 15 minute nap resulted in whine-crying for the final hour of the hike. 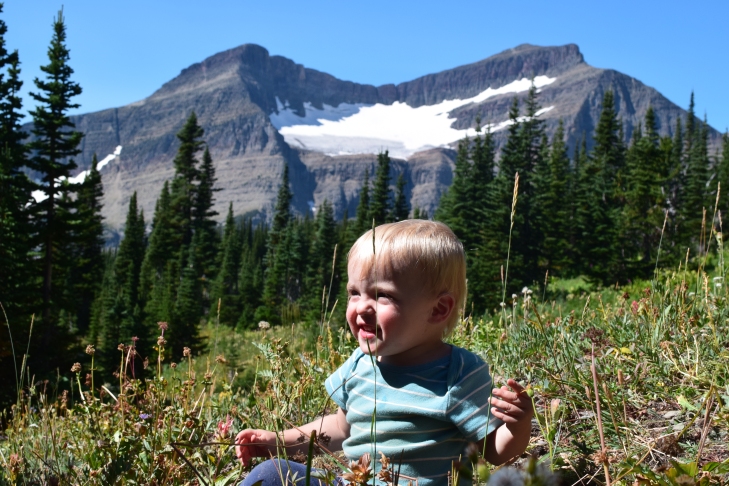 (4) Ansel helped us meet other hikers who encouraged our efforts and loved to say things like, “Look who’s getting a free ride!” and “That’s the easy way up!” 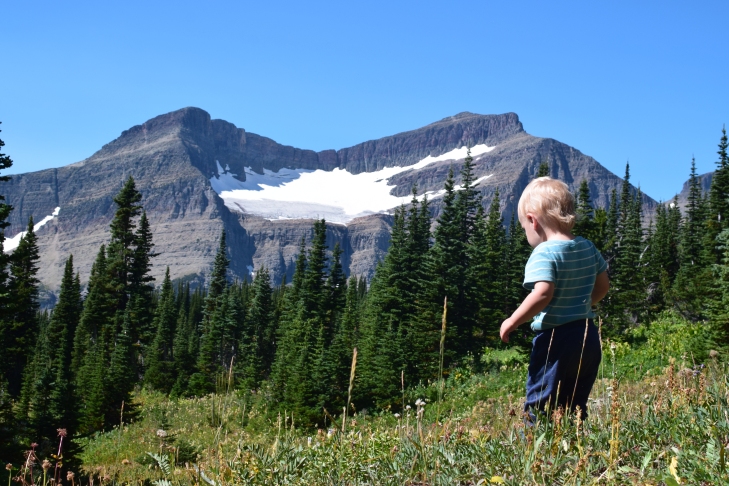 (5) Ansel got out of the backpack and actually hiked some of the way himself! He often went waaaaay off course and at one point started picking wildflowers and putting them in his mouth. “The hills are alive….!”

Carrying him and dealing with poop and meltdowns is all worth it when we get to spend time with him doing one of our favorite activities.

All of my love to anyone out there dealing with any purple bird poop. You’re in my heart.

One thought on “German Chocolate Cake”